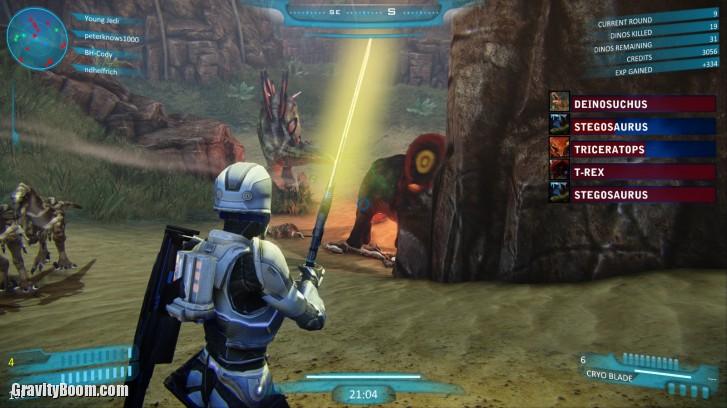 Many of them you’ll get through normal game play, but the ones we’ll mention here might need some foresight and planning. If you find Orion: Dino Horde fun to play you’ll (mostly) enjoy getting these achievements too.

Achievement Grinds: Do these early, do these often.

Fancy Dance Moves Use 100 Sabre Combos
The TREK Ion Blade is a secondary weapon any class can purchase from the weapon bunker for 20,000 credits. Use sabre combos to kill 100 targets. The only combos I know of are holding the melee button (default ‘v’) to do a 360 sabre sweep, and the power hit which is left mouse button/left mouse button/hold left mouse button. The button ones are timing tricky so the 360 sabre sweep is easiest.

Expert of Revival Revive 1000 downed teammates with the Revital Kit
Not only is the Revital Kit the least useful of the items available, but it doesn’t mesh well with the Assault class and even less with the Support class. It’s best with the Recon class, as you can cloak and sprint to a downed teammate for easy revivals. Now just do it 1000 times. This is by far the biggest achievement grind, especially since the better the player the less they fall.

Maximum [Game Mode] Play 100 [Game Mode] Matches
Multiplayer games are rare, so keep an eye out for them. Another option is to find another achievement hunter and take turns grinding these out. Note that the host of the game won’t be disconnected for inactivity.

Expert of Utility Repair a broken generator 1000 times with a Utility Gun
Luckily, the utility gun is a great supplement for any class, so all you have to do is remember to use it whenever the power generator goes down. Remembering is the hardest part so we mention it here. 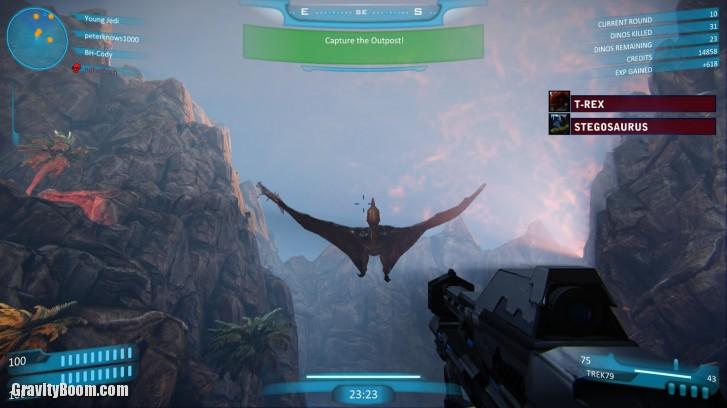 Hang Glider! Get picked up 1,000 times
This happens when a pterodactyl grabs you and flies away. When that happens, you can hit the melee button (default ‘v’) to break loose. Achievement tip: when you hear the pterodactyl screech, stand still so he has a better chance of picking you up.

Rocketeer Spend 5 hours Jetpacking
Only the Assault class has the jetpack, and each burst lasts only a handful of seconds, making this achievement grind a total pain in the ass. When you play Assault, remember to use the jetpack at every opportunity and try not to rage because the class achievements for Support and Recon only require 1 hour instead of 5.

Rebel Scum Kill 100 Ion Blade wielding opponents with a gun
In a Duel match, use your pistol instead of the Ion Blade. Try to find another achievement hunter to make this go faster. You can do I Am Your Father Kill 100 people in Duels at the same time.

Expert of Egg Kill 1000 enemies with the T-Rex Egg
Available only in Rampage game mode, grab an egg, avoid the T-Rex and melee smash (default ‘v’) any raptor that gets in your way. Grind this out 1000 times.

Sally Slapper! Punch a T-Rex in the face 100 times
Is this for real? Who would punch a T-Rex once let alone 100 times? Well anyway use the melee key (default ‘v’) when you’re in front of the T-Rex trying not to get chomped. It’s good to have the augment ‘Iron Cowl’ so you can’t get eaten. It’s easier to do this having your friend play the T-Rex in a game of Rampage. 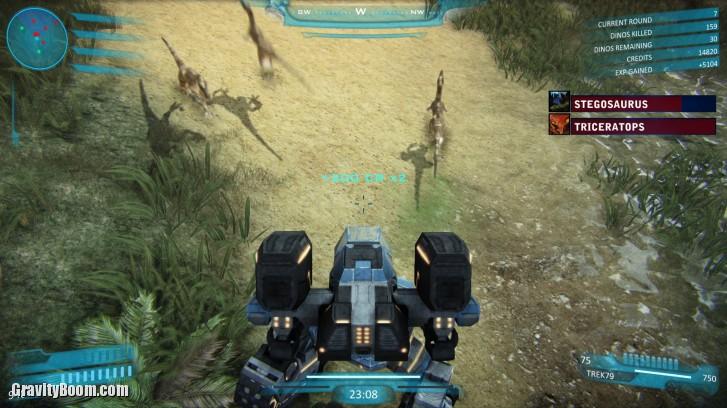 Curb Stomping! Stomp 100 Raptors in the Cobra Mech
When in the Cobra Mech, hit the Use Ability key (default ‘CTRL’) to stomp the ground and do damage to any nearby dinosaurs. So basically just stomp when surrounded by Raptors.

Bank of Orion Hand out $100,000 in Spiral Credits
Hitting the ‘k’ key will drop 1000 of your credits as little green bars. You can drop and pick them up yourself to get this achievement. Quick note: if you have to quit a game consider dropping your cash first for your teammates.

Angry Birds Stasis Fury kill 100 Rhams
Only available to the Support class with the Stasis Fury augment, use your medic gun on any Rhams that get close. The beam will stun them and drain their health until they die.

I Am Annoying Taunt 100 times
This achievement is annoying. Use the ‘j’ key to taunt at any time.

Captain Hook Kill the Deinosuchus 100 times
The Deinosuchus is the alligator related dinosaur that has short bursts of speed and chomps you dead. When you see one, concentrate all your firepower and make sure you’re the one to kill it. 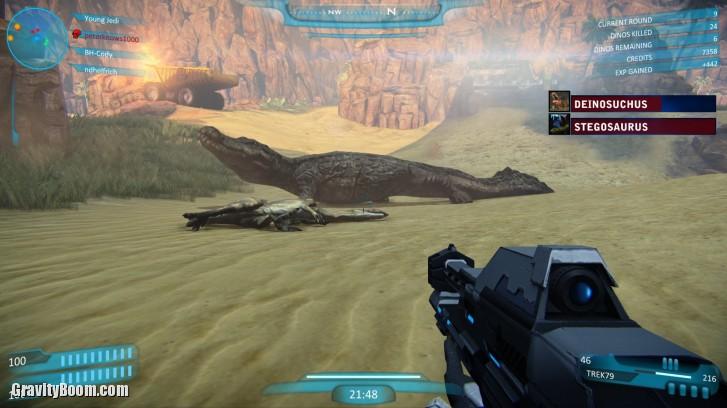 Achievement Hunts: keep an eye out for these opportunities

Spiral Troll! Kill a developer
There are few developers, and they certainly don’t play as much as we do. The odds of finding one in a rare multiplayer match are extremely low, so it might be best to friend some of the developers on Steam and join in when they play. You can find the current team at Spiral Game Studios.

Dino Whisperer! Ride a dino for 10 seconds
A lot harder than it sounds, you have to jump or jetpack on the back of a large dinosaur and stay on for 10 seconds. It’s difficult because the dino will be moving and the back is a ‘slide’ surface meaning you’ll have to constantly adjust to stay on. Achievement tip: have a friend play a large dino in a game of Rampage so he can stay still while you attempt this one. It’s easier when they’re not trying to eat you.

Got the Moves Like Jagger! Roll out of a T-Rex chomp
This one just requires timing. Get a T-Rex to chase you and when he gets close for a chomp, use the Roll key (default ‘c’) to dodge to safety.

Glass Ceiling! Reach the top of the world
After you capture the outpost before wave 10, two VTOL vehicles will appear. Jump in one and hit ‘space’ to climb in altitude until you cannot go any higher. Also note: the ‘c’ key will lower your altitude. 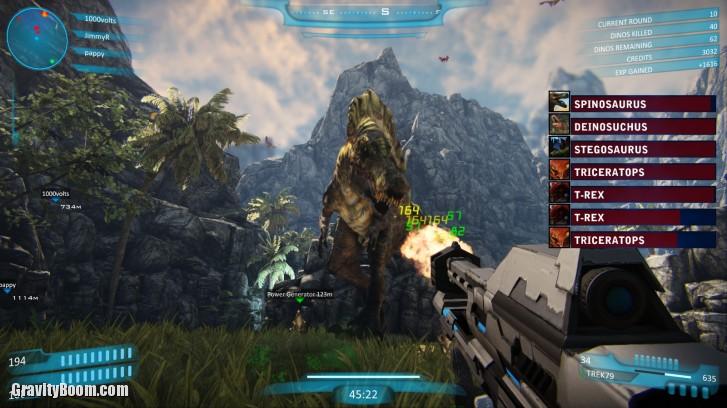