Orion: Dino Horde back for more 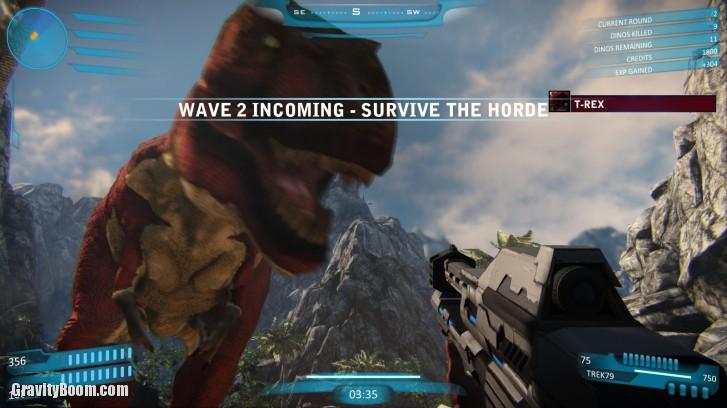 Orion: Dino Horde is a dinosaur video game from indie developer Spiral Game Studios, which is somewhat like a cross of Halo and Jurassic Park, only on a much smaller  budget.

It was originally rushed to release last year as ‘Orion: Dino Beatdown’ to horrible reviews and angry players due to many bugs and glitches. Wiping the egg off their faces, the studio buckled down, made a total overhaul, and  re-released the game with it’s current name.

I first stumbled across Orion: Dino Horde when they had a free week of play to entice more players on Steam. Like I usually do, I checked the forums first and found a lot of controversy. What got me really interested though, was one player’s claim that this was the WORST game EVER made. That meant I had to check it out. I HAD to. 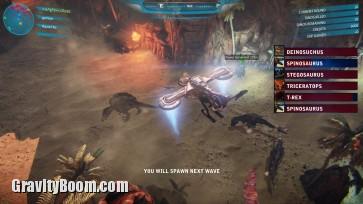 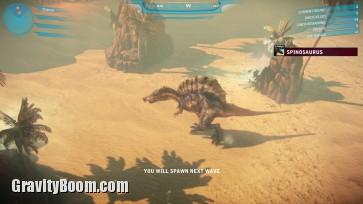 Yes it had some bugs still and crashed under certain conditions, but once I got through that Orion: Dino Horde was pretty fun. Your team of one to five players must defend your base from waves of man-eating dinosaurs in survival mode. You get credits and XP for each kill and between waves you can spend your money on better weapons and soldier augmentations. Dinosaurs get bigger and meaner, and yes the T-Rex is a scary beast, but I’d say there are others even more dangerous!

There are three classes to play in Orion: Dino Horde, each with unique weapons and a special ability. Each class has it’s own leveling system which gives you up to fifty perks such as +10% to your primary weapon, starting equipment or bonuses to XP gain. The Assault class has a jet pack you can use to temporarily fly around and reach higher ground or evade dinosaur trouble. The Support class has a medic gun to heal yourself and your team. Last but not least the Recon class has a cloaking ability to drop aggro from attacking dinosaurs. Each class gets better as you level up.

It’s definitely gotten better since the free weekend of Orion: Dino Horde as they’ve been releasing lots of updates, bug fixes, and new content that’s free to players. There’s still some things to fix imho, but I’ve had tons of fun playing this video game as I prefer co-op play, but I can play single player just as well too. They’ve already announced even MORE content coming, including new maps and an open world concept. What’s great is these updates are free.

Does Orion: Dino Horde have multiplayer? Yes and no. Yes, there are lots of MP game modes like King of the Hill, Duels, Free For Alls, Dinos vs Humans and more. The bad news is, the few players this video game has prefers to play co-op mode. The multiplayer games are hard to find and when you do, they usually aren’t full teams. If you’re big on multiplayer, this dinosaur video game might not be for you. Not yet anyway, unless the player base increases a lot. Co-op teamwork is really where it’s at.